Here’s a letter to the Mayor and City Council from Pearl Jam, the Presidents of the USA, Macklemore & Ryan Lewis, KEXP DJs and other members of Seattle’s music scene. In it, they express what Sonics Arena and the return of the Sonics will mean to the music community, Sodo, and Seattle Center. 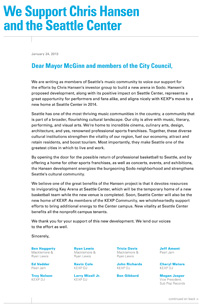 “We believe one of the great benefits of the Hansen project is that it devotes resources to invigorating Key Arena at Seattle Center, which will be the temporary home of a new basketball team while the new venue is completed. Soon, Seattle Center will also be the new home of KEXP. As members of the KEXP Community, we wholeheartedly support efforts to bring additional energy to the Center campus. New vitality at Seattle Center benefits all the nonprofit campus tenants.”