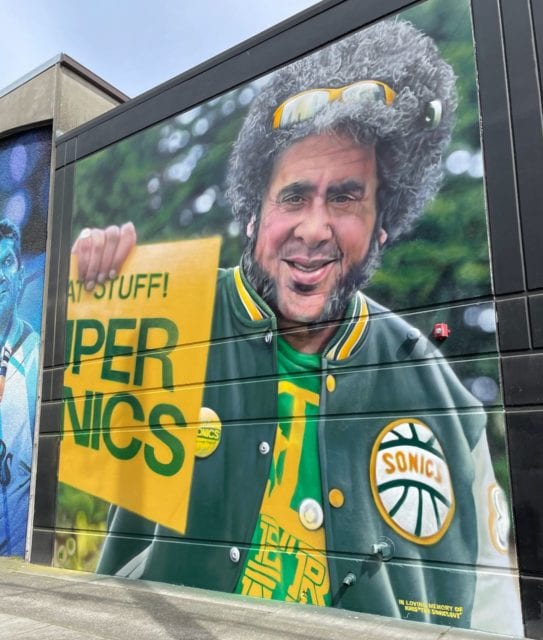 Big smile, bigger hair, and enthusiasm for his team beyond measure, Kris Brannon was a superfan who took up the “Bring Em Back” mantle for the Sonics with the commitment and perseverance of the larger-than-life superheroes he so avidly collected.

Kris was the embodiment of the Sonics community, who showed up almost everywhere for anything Sonics. And he’s a huge part of why we’re all still pushing hard to bring an NBA team back to Seattle.

Always ready with a smile and a “Bring ‘Em Back” sign in hand, Kris’ battle cry could be heard above the din of any crowd, at games, City Council meetings, rallies, he was a presence that would not be ignored.

His untimely death last month cast a cloud of grief over the whole Sonics community. Though we’ll never forget him, our community lost something irreplaceable with Kris’ passing.

Although heart issues prevented him from participating in sports in high school, his spirit and passion for Sonics basketball made him a true ambassador and it’s only fitting that in memoriam, he shares space right next to some of Seattle’s most loved sports legends.

That’s why we dedicated a new frame of the 1st Avenue South “Wall of Fame” and commissioned Jeff Jacobson, AKA Weirdo Cult, to paint an oversized Sonics Guy mural that puts Kris right next to Walter Jones, Jack Sikma and Edgar Martinez to help sports fans remember his contribution for years to come.


Jeff really channeled Kris’ energy in the work he completed Friday. It looks amazing. Check it out the next time you are down in SODO.

Here’s to you, Kris. Thanks for everything you’ve done for Sonics fans everywhere. We’ll never forget and we won’t stop trying until we make your dream, and ours, come true.